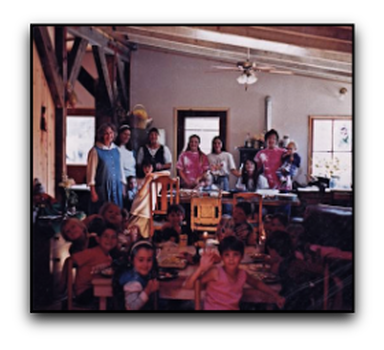 In 1987, a dedicated group of parents, concerned about the quality of their children's education, began investigating alternative but proven educational methods and philosophies. Two years later, after extensive research and shepherding from experienced Waldorf educator and mother of five, Nancy Jewel Poer, our school became the 121st Waldorf School in the United States. The first Kindergarten class began in a barn on the White Feather Ranch of Nancy and Gordon Poer on September 29, 1989 (Michaelmas).

The school was incorporated in 1990 as a private, non-profit, tax-exempt, non-sectarian educational organization. The following year, the school relocated to property owned by a founding family, the Hodgkins. Parents of the new school volunteered their time during the summer to build classrooms for the students.
​In 1998, our first Eighth Grade class of 10 students graduated. Today, we have nearly 180 students, with programs ranging from Parent-Child, a three-day Kindergarten program, two full-time Kindergartens and First through Eighth Grades. The Faculty has increased from one part-time teacher to 13 full-time class teachers and additional assistants, special subject teachers, support staff and administration. Our growth and success at Cedar Springs is grounded in parent involvement and community-based leadership and we remain committed to building a strong and vibrant community to serve our students well into the future.

fill out an inquiry form!